From Heraldry of the World
Your site history : Bury (England)
Jump to navigation Jump to search 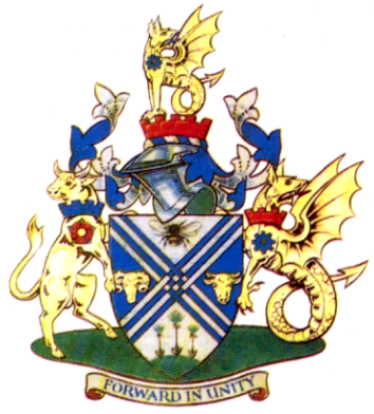 Arms : Per saltire Argent and Azure a Saltire party and fretty counter-changed between in chief a Bee volant in base three Culms of the Papyrus Plant issuant from a Mount proper and in the flanks a Ram's Head to the dexter and a Bull's Head to the sinister both of the First.
Crest : On a Wreath of the Colours a Mural Crown Gules thereon a Wyvern reguardant wings expanded Argent and charged on the shoulder with a Cog-Wheel Azure.
Supporters : On the dexter a Bull reguardant Argent gorged with a Mural Crown Azure and charged on the shoulder with a Rose Gules barbed and seeded proper and on the dexter a Wyvern reguardant wings elevated also Argent gorged with a Mural Crown Gules and charged on the shoulder by a Cog-Wheel Azure.
Motto: 'FORWARD IN UNITY'

The concept of dividing the shield (the interweaving providing a clear allusion to the textile industry) has been retained from the old arms(see below), though as a saltire rather than a cross, and so have the colours silver and blue. From Bury's crest comes the bee to represent industry and from its arms the culms of a papyrus plant to represent papermaking. The ram's and bullock's heads on either side of the shield were taken directly from the crests of Ramsbottom and Tottington respectively. The fact that the principal colour of the field is silver should be taken as an allusion to Whitefield.

A wyvern placed on a mural crown with six castellations (representing the six constituent authorities) forms the crest.

The supporters are drawn from the crests of Radcliffe and Prestwich and represent two old established families, the Radcliffes and the Egertons. They wear mural crowns and a red rose (for Lancashire) and a cogwheel (a symbol of engineering). 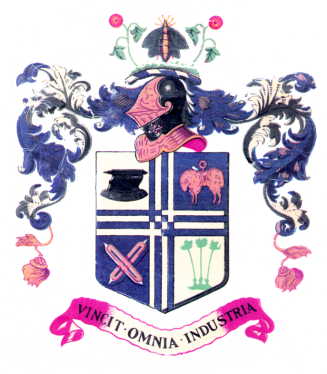 Arms : Quarterly Argent and Azure a Cross party and fretty counter-changed between an Anvil Sable in the First Quarter a Fleece Or in the Second two Shuttles in saltire threads pendent proper in the Third and three Culms of the Papyrus Plant issuing from a Mount also proper in the Fourth.
Crest : Upon a Mount a Bee volant between two Flowers of the Cotton Tree slipped all proper.
Motto: 'VINCIT OMNIA INDUSTRIA' - Industry overcomes all things

The arms were officially granted on February 28, 1877.

The arms have a fretty party cross representing weaving. Around this are arranged symbols of local industries. These are an anvil (metalwork), a fleece (wool), two shuttles (textiles) and culms of the papyrus plant (papermaking).

The crest shows a bee for industry between two branches of the cotton plant.

The motto was VINCIT OMNIA INDUSTRIA or Industry conquers all.