From Heraldry of the World
Your site history : Buxtehude
Jump to navigation Jump to search 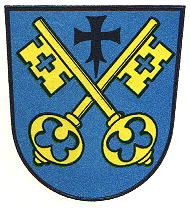 Buxtehüde was founded around 1280 by Giselbert Archbishop of Bremen, and the oldest seal is known since 1304. The seal already showed the two crossed keys, symbol of St. Peter, patron saint of Bremen. The small cross is derived from the arms of the diocese of Verden, to which the city belonged.


In the 17th century the city used a helmet, with as a crest two buffalo horns with the cross of Verden in between.