From Heraldry of the World
Your site history : Camberwell
Jump to navigation Jump to search 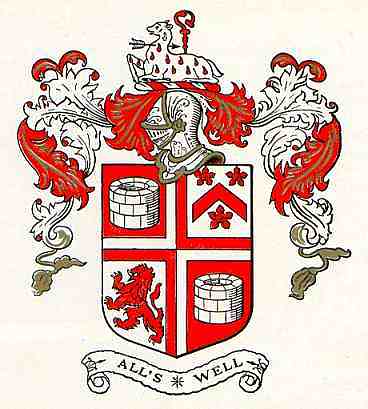 Arms : Quarterly Gules and Argent a Cross quarterly between a Well in the first and fourth quarters a Chevron couped between three Cinquefoils in the second and a Lion rampant in the third all counter changed.
Crest : On a Wreath of the Colours in front of a Crosier erect Gules a Hind lodged Argent gutté-de-sang pierced through the neck with an Arrow fessewise Sable.
Motto: 'ALL'S WELL'

The well in the first and fourth quarters is a 'canting' allusion to Camberwell and also to the many wells of the district, of which one at least was reputed to have healing properties; the lion rampant is the arms of Robert, Earl of Gloucester, a natural son of Henry I, who was lord of the manor of Peckham; while the chevron and cinquefoils come from the arms of a lord of the manor of Dulwich, Edward Alleyn, the founder of Dulwich College.

The crest of a wounded hart and abbot's crosier represents St. Giles, patron saint of Camberwell, to whom the parish church is dedicated.

The motto is again a 'canting' allusion to Camberwell and is part of the army password "Pass friend and all's well", much used in the Boer War which was being fought when the arms were granted.