From Heraldry of the World
Your site history : Camden
Jump to navigation Jump to search 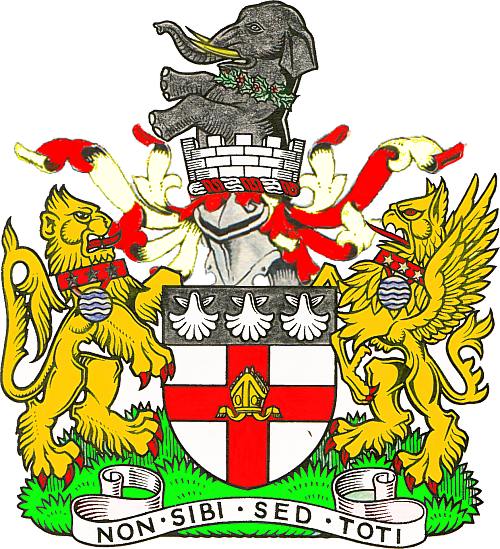 Arms: Argent on a Cross Gules a Mitre Or a Chief Sable thereon three Escallops Argent.
Crest: On a Wreath of the Colours issuant from a Mural Crown Argent a demi Elephant Sable armed Or about the neck a Wreath of Holly fructed proper.
Supporters: On the dexter side a Lion and on the sinister side a Griffin Or each gorged with a Collar the dexter Argent charged with three Mullets Sable the sinister Gules charged with three Mullets Or and pendent from the collar of each a Fountain.
Motto: 'NON SIBI SED TOTI' - Not for self but for all.

The red cross on silver is for St. George, patron of two parishes in Holborn. The mitre stands for Westminster Abbey, lords of the manor of Hampstead for 6 centuries. The black chief with three white scallops comes from the arms of the Russell family, Dukes of bedford. A similar chief appears in the arms of Bedfordshire County Council. The Dukes were important landowners in both Holborn and St. Pancras.

The crest has a mural crown, symbol of local government. it also shows that Camden lies adjacent to the old City of London wall. The black elephant comes from the arms of the Marquess of Camden. This featured in the shield of St. Pancras. Together with the mural crown it suggests the Borough of Camden. The holly wreath comes from Hampstead's arms.The supporters are derived from the arms of Lincoln's Inn (The Lion) and Gray's Inn (The Griffin). Each is differenced by a collar bearing three stars one for each of the three merged boroughs. The total number of stars is six for the six old parishes of Camden.

The colours are derived from the arms of all three old boroughs. The fountains represent the canals and waterways of the borough.The motto was previously used by Holborn.