From Heraldry of the World
Your site history : Canadian War Museum
Jump to navigation Jump to search 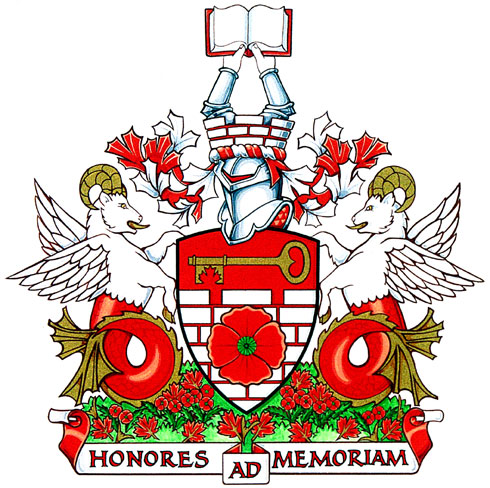 Arms : Argent masoned and thereon a poppy flower Gules seeded Vert on a chief embattled Gules a key wards to the dexter and downwards Or
Crest : Out of a mural coronet Argent masoned Gules two arms in armour embowed in-wards Argent the hands holding an open book proper bound Gules
Supporters : On either side of a grassy mound Vert thereon poppy flowers and maple leaves Gules and maple seeds Or a winged sea ram per fess dancetty Argent and Gules armed langued unguled and finned Or
Motto : HONORES AD MEMORIAM

The bricked wall with embattlements recalls the fortresses built for defence in Canada. The key refers to the Museum’s curatorial responsibilities including the notion of safe-keeping and the “unlocking” of knowledge. The poppy symbolizes the wartime sacrifices of Canadians and the Museum’s role in preserving their memory.

The coronet repeats the fortress motif of the shield. The armoured arms and the open book symbolize knowledge, research, and the safe-keeping and storage of historical artefacts.

The wings on the ram symbolize the Air Force services, the dolphin tails refer to the Navy, and the rams are a reference to the Army services, recalling the emblem of the Canadian Armoured Corps active during the Second World War. The rams further represent the notion of charging ahead without backing down from one’s opponent. These creatures, designed specifically for the Museum, stand on a field of poppies and maple leaves, honouring the fallen Canadian soldiers.

The Motto HONORES AD MEMORIAM is a Latin phrase meaning “Honours for memory”. It emphasizes the Museum’s mandate to honour the memory of those who have served their country in time of war, through its vast collection.