From Heraldry of the World
Your site history : Cannock RDC
Jump to navigation Jump to search 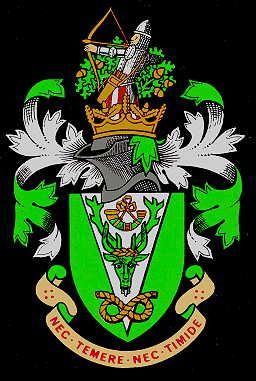 Arms : Vert, on a pile argent enfiled in base through a Stafford knot Or a stag's head caboshed, between the antlers a bugle horn sable garnished and stringed, the burrs environed of a wreath of laurel leaves Or.
Crest : Out of a coronet compose dof four ears of wheat and as many acorns leaved set alternately upon a rim Or and in front of the head of an oak tree proper fructd Or, a demi archer bearded, in armour, proper, vested from his waist paly argent and gules, slung from the shoulder and at the waist a quiver of arrows Or, and in the hands a bow and arrow drawn to the head Or.
Motto: "Nec temere nec timide'

The stag's head and hunting horn represents Cannock Chase and the Forest of Brewood. The Stafford knot refers to the county and the laurel leaves are from the arms of the Leveson family, now Dukes of Sutherland, who had much to do with the development of the local mining industry.

The crown of wheat ears and acorns was created to represent rural districts and the archer derives from the crest of the Giffard family, resident at Chillington Hall. The oak tree recalls the famous Boscobel Oak within which King Charles hid to escape the Roundheads following the Battle of Worcester in 1651.

The motto is that of the Bridgeman family.