From Heraldry of the World
Your site history : Cape Province
Jump to navigation Jump to search 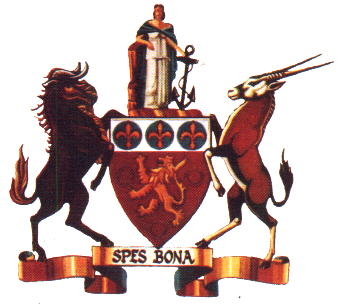 The Cape Province was the successor of the Cape of Good Hope Colony.

The first arms of the province were granted on 4 May 1911 and show the figure of Hope, previously as a crest for the arms of the colony.

In 1948 new arms were proposed, with the figure of Hope on a shield, the wildebeest and gemsbok from the old arms as supporters, and the ship the Drommedaris of Jan van Riebeeck as a crest. These arms were never adopted.

In 1950 the government asked all provinces which arms they wanted to use. The Cape province decided to return to the colonial arms, with a slight change, the tails of the supporters shown upwards instead of hanging down. These arms (see above) were officially granted on the 22nd of June, 1954, but were first used in 1952.