From Heraldry of the World
Your site history : Cape of Good Hope Colony
Jump to navigation Jump to search 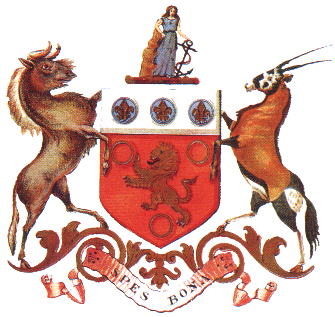 The first European colonists on the Cape of Good Hope were send by the Dutch East India Company (Vereenigte Oost Indische Compagnie, or VOC) in 1652. In 1792 the colony was occupied by British forces, in 1803 the colony became Dutch again. In 1806, in the war with France, the British occupied the colony again (Holland at the time was also occupied by France). It remained a British colony until 1910.


During the Dutch time the colony did not have its own arms. The first move towards colonial arms and a special seal was made in 1827. The colony received its seal in 1827, but no arms. The seal showed a panoramic view of Table Bay. No attempts were made to design colonial arms until the 1860s, when all ships based in the British colonies were required to use the Blue Ensign, with the arms of the colony.
Around 1868 a first proposal was made for colonial arms. It showed a lion between three annulets, and a chief with three roundels, each charged with a fleur-de-lis. As supporters a wildebeest and a gemsbok were used, and the figure of Hope as a crest. The motto "Spes Bona' means good hope.

The arms were adopted by the local government in 1875 and used on the local flag. This, however, was illegal, as the arms were not officially approved. The arms were approved on 29 May 1876, one year after the first use.

The lion in the arms represents both Holland and England, both countries use a lion in their national arms. The lion is also native to Southern Africa. The three annulets are the arms of Jan van Riebeeck, the founder of the (Dutch) colony, see also Cape Town. The fleur-de-lis in the chief are derived from the French Royal arms, as a large part of the colonists in the Cape were French Huguenots (protestants). The supporters are local animals and the crest symbolises the name of the colony.

The arms remained unchanged until 1910, except for a single seal made on the seal with King Edward VII for the colony. For some unknown reason the figure of Hope was replaced by a crown.