From Heraldry of the World
Your site history : Carlisle
Jump to navigation Jump to search 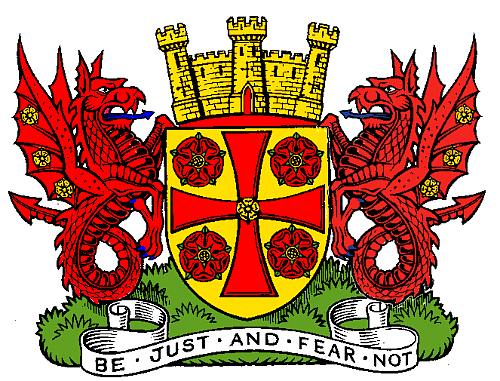 Arms : Or on a Cross patée between for Roses Gules a Rose of the field barbed and seeded proper; The Shiels ensigned by a Mural Crown having three Towers Or and lined Gules the centre Tower pierced by a Gateway Gules.
Supporters : Upon a Mount Vert on either side a Wyvern Gules armed and langued Azure the wings semée of Roses Or barbed Vert.
Motto: 'BE JUST AND FEAR NOT'

Before 1924 the City Council used two unofficial coats of arms. On 7th July 1924 one of the two shields was officially registered as the arms of the City and a mural crown and supporters added.

The red patonce cross on gold was the arms of Sir William de Carlyell of Cumberland. The red roses show the city's Lancastrian sympathies, while the gold rose is the badge of King Edward I.Above the arms is a distinctive mural crown. This recalls the castle in the second unofficial coat of arms. The gateway reflects the fact that the city lies near the English Scottish border.In the unofficial arms the two shields were supported by a red dragon. This is perpetuated by the two wyverns that support the arms. They recall the ancient British Kingdom of Cumbria, and a red dragon supports the arms of Cumbria County Council for the same reason. The wyverns are differenced by having their wings charged with gold roses.