From Heraldry of the World
Your site history : Carmarthen RDC
Jump to navigation Jump to search 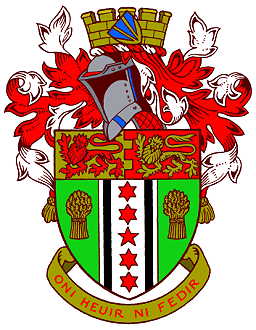 Arms : Vert on a Pale Argent between two Garbs Or a Mullet of five points between four Mullets of six points Gules between two Pallets Sable a Chief per pale embattled Or and Gules thereon two Lions passant guardant counterchanged.
Crest : On a Wreath Argent and Gules a Mural Crown pendent from the middle battlement an Escutcheon bendwise Or charged with three Piles Azure.
Motto: 'ONI HEUIR NI FEDIR' - Without sowing one cannot reap

The lions are from the arms of Wales. The green field and wheatsheaves refer to agriculture, and the black palets to coal. The points of the stars total 29, corresponding with the number of parishes in the District. One of these is Laugharne, which has a fine castle, represented by the mural crown, on which is the shield of Guy de Brian, a lormer lord of Laugharne.