From Heraldry of the World
Your site history : Carshalton
Jump to navigation Jump to search

Incorporated into : 1965 London Borough of Sutton 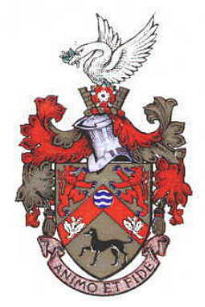 ARMS: Or on a Chevron between in chief two Lions rampant combatant Gules and in base a Greyhound passant Sable a Fountain between two Sprigs of Oak fructed Argent.
CREST: On a Wreath of the Colours out of a Mural Crown Or charged with a Rose Gules thereon another Argent barbed and seeded a Swan rousant holding in its beak a Sprig of Beech proper.
MOTTO: 'ANIMO ET FIDE' - By Courage and Faith.

The main colours of gold and red are those of the arms of the Mandevilles, Lords of the Manor of Carshalton at the time of the Domesday survey. The lions with a forked tail derive, with a change of colour, from the heraldry of the Burghershes, who held the sub-manor of Stone Court in the 14th century and the six gold lions from the arms of the de Bohuns, Earls of Hereford and Essex and heirs of the Mandevilles. Lions, or their heads, also appear in the arms of Sir John Fellowes and those of Philip Yorke, Earl of Hardwicke; both of whom, at different times, owned Carshalton House.
The red chevron is for both Gainsford, a family which held Stone Court in the 15th and 16th centuries, and Scawen: the latter family holding the sub-manor of Mascalls (the house or its successor, later becoming Carshalton Park or Place) from 1713 to 1781.
The heraldic fountain, the symbol for water, stands for Carshalton's springs, pools and ponds; and the River Wandle which rises partly in Carshalton.
The sprigs of oak provide a link with the arms of the Surrey County Council, and also refer to The Oaks, the house once belonging to the Earls of Derby, now demolished, which used to stand in the Oaks Park in the south of Catshalton. From here, both the Derby and the Oaks horse races received their names.


The mural crown is from the crest of the Fellowes family who owned Carshalton House from 1714 to 1731. The swan again symbolises Carshalton's waters, and the sprig of beech in its beak represents Carshalton Beeches.