From Heraldry of the World
Your site history : Castle Donington
Jump to navigation Jump to search 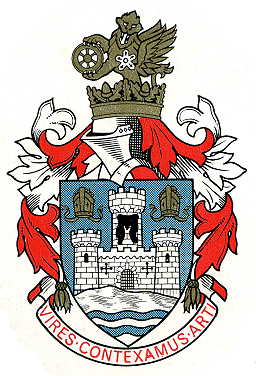 Arms : Azure on a Base barry wavy of four Azure and Argent a Granite Rock proper thereon a Castle of three Towers Silver that in the centre charged with a Maunch Sable in chief two Mitres Or.
Crest : Issuant from a Coronet composed of four Ears of Wheat and as many Acorns leaved set alternately upon a Rim Or a demi Lion guardant winged Or charged on the shoulder with a Cinquefoil pierced Ermine and holding in the paws a Wagon-Wheel proper; Mantled gules, doubled argent.
Motto: 'VIRES CONTEXAMUS ARTI'

The arms were officially granted on `November 20, 1962