From Heraldry of the World
Your site history : Castlereagh RDC
Jump to navigation Jump to search 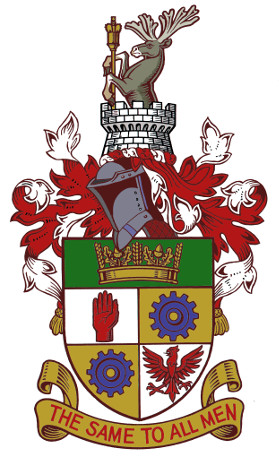 Arms: Quarterly argent and Or, in the first quarter a dexter hand appaumy gules, in the second and third a cogwheel azure, and in the fourth an eagle displayed gules; on a chief vert a rural crown Or.
Crest: On a wreath of the colours Issuant from the battlements of a tower argent, masoned sable, a demi Irish Elk proper supporting between the legs a ceremonial mace Or.
Motto: The same to all men.

If you have any information on these arms RDC mail us !