From Heraldry of the World
Your site history : Ceredigion
Jump to navigation Jump to search 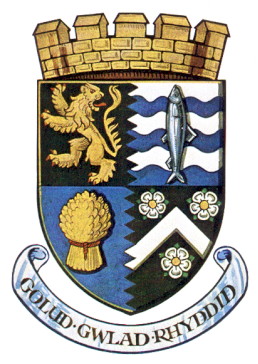 The top left quarter, a golden lion rampant on a black ground, is based on the arms of Gwaithfoed - a medieval prince of Ceredigion.

The top right quarter, a herring against a background of the sea, signifies the fishing industry of Ceredigion.

A wheatsheaf in the bottom left quarter represents agriculture, the county's dominant industry.

Shown on the bottom right quarter are the arms ascribed to Dewi Sant (Saint David), the Patron Saint of Wales, who had very close associations with Ceredigion.