From Heraldry of the World
Your site history : Ceres
Jump to navigation Jump to search 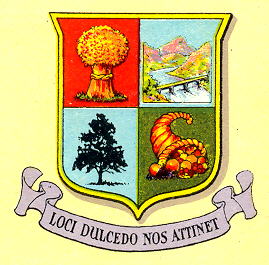 The town was named after the Roman goddess of fertility, because it is situated in a fertile farming area. The design of the "arms" suggests wheat-farming and fruit-farming, and the landscape in the second quarter is probably a local scene.

These "arms" were later (by the 1960s) replaced by an heraldic device: Vert, a fess wavy Argent charged with a barrulet wavy Azure, over all a pale Argent charged with a representation of the goddess Ceres vested Vert holding in her dexter hand a sheaf of wheat and in her sinister a torch enflamed all proper, in chief a mural crown Gules. They were registered at the Bureau of Heraldry in 1974.
(I have no image therof).