From Heraldry of the World
Your site history : Chelmsford
Jump to navigation Jump to search 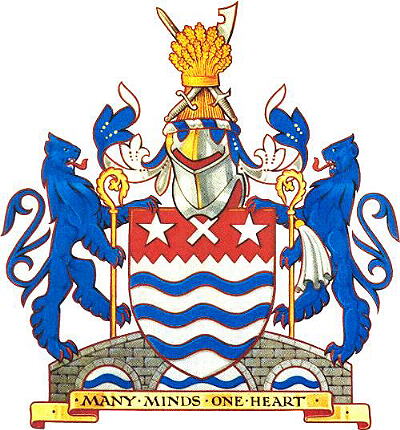 Arms : Argent three Bars wavy Azure on a Chief indented Gules a Saltire couped between two Mullets Argent.
Crest : On a Wreath of the Colours a Garb Or transfixed with a Seax and a Sword in saltire points upwards both proper.
Supporters : Dexter a Lion Azure supporting an Episcopal Crozier Or sinister a like Lion supporting an Abbatical Crozier Or with Veil proper upon a Compartment comprising a triple arched Stone Bridge above Water barry wavy.
Motto: 'MANY MINDS ONE HEART'

The arms were officially granted on March 3, 1975.

The blue waves represent the Rivers Chelmer and Cam. The indented chief is taken from the arms of Westminster Abbey, holders of the manor. On the chief is a couped saltire from the arms of the Diocese of Chelmsford between mullets from the arms of De Vere, Earl of Essex.The crest has a golden garb, symbolising the former Rural District Council.

Through the garb are thrust a seaxe from the Essex county council arms and a sword from those of the Diocese of London.

The supporters are the blue lions of the Mildmay family. They hold symbols of the modern Diocese and ancient abbey of Diocese. The compartment is a stone bridge, derived from the old Chelmsford arms.The motto is "Many hearts one mind". 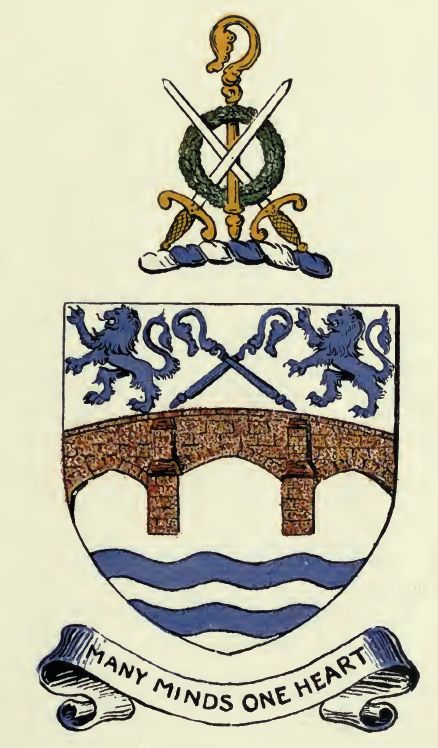 Arms : Argent a Bridge of three arches proper in chief two Croziers in saltire between as many Lions rampant Azure in base two Bars wavy of the last.
Crest : On a Wreath Argent and Azure upon a Rock Proper a Crozier in pale Or surmounted by two Swords in saltire points upwards proper pommels and hilts Or interlaced by a Wreath of Oak Vert.
Motto: 'MANY MINDS ONE HEART'

The arms were officially granted on February 6, 1889.

The crosier is a further reference to the Abbots of Westminster and the crossed swords are from the arms of the See of London. The circlet of oak leaves is a symbol of civic authority. The rock appears to have no significance, and although officially part of the crest was omitted in some representations.