From Heraldry of the World
Your site history : Chelsea
Jump to navigation Jump to search

Incorporated into : 1964 Kensington and Chelsea 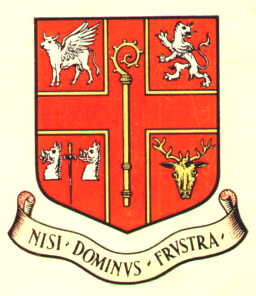 Arms : Gules within a Cross voided Or a Crozier in pale of the last in the first quarter a winged Bull statant in the second a Lion rampant reguardant both Argent in the third a Sword point downwards proper pomel and hilt Gold between two Boars' Heads couped at the neck of the third and in the fourth a Stag's Head caboshed of the second.
Motto: 'NISI DOMINUS FRUSTRA' - Unless God be with us all will be in vain

The arms were officially granted on February 28, 1903.