From Heraldry of the World
Your site history : Chichester RDC
Jump to navigation Jump to search 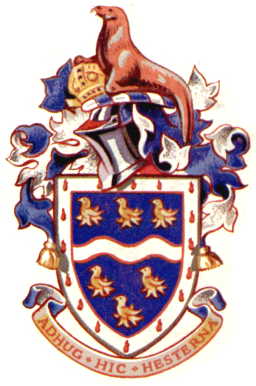 Arms : Azure a Fess wavy Argent between six Martlets Or a Bordure Argent Guttée de Sang.
Crest : Upon a Wreath of the Colours a Seal proper resting the dexter front flipper upon a Mitre Or.
Motto: 'ADHUC HIC HESTERNA'- The things of yesterday are still with us.

The six martlets or heraldic Swallows on the blue background are the arms attributed to the South Saxons and now form the chief feature of the arms of West Sussex CC. The white wave, represents the flow of the River Arun and the Chichester Canal across the area. The white border carries red drops taken from the arms of the City of Chichester, and thus links the RDC with its namesake.

The seal holding a mitre represents Selsey " Seal's Island ", and recalls that Selsey was the first stronghold of Christianity in this part of England, before the bishopric inspired by St. Wilfred was transferred to Chichester. The seal may also be considered as showing that the original site of the cathedral is now submerged, and the mitre also has a reference to the Priory of Boxgrove.

The motto 'ADHUC HIC HESTERNA'- The things of yesterday are still with us.

Literature : Scott-Giles, 1953 and image from http://www.civicheraldry.co.uk