From Heraldry of the World
Your site history : Chingford
Jump to navigation Jump to search 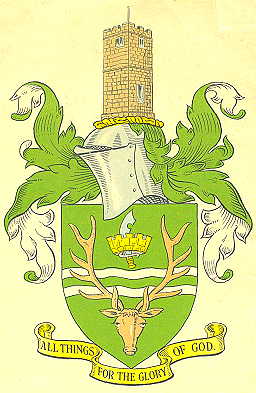 Arms : Vert two Bars wavy Argent over all a Stag's Head caboshed proper between the attires in a Seax also proper pommelled and hilted and enfiled with a Mural Crown Or.
Crest : On a Wreath of the Colours a representation of the Tower of the Old Church proper.
Motto: 'ALL THINGS FOR THE GLORY OF GOD'

The green and white fess alludes to the River Lea and the ford which gave Chingford part of its name. The mural crown is a symbol of civic government and the seax is from the arms of the County Council. The stag's head refers to the fact that Chingford was in the great Forest of Essex.

The crest shows the tower of the old parish church, a representation of which has been used on the seal of the former Urban District Council since its inception.