From Heraldry of the World
Your site history : Chorley RDC
Jump to navigation Jump to search 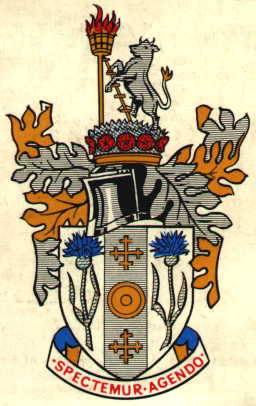 Arms : Argent on a Pale Sable between two Cornflowers stalked leaved and flowered proper a Standish between two Cross Crosslets of the field.
Crest : Out of a Coronet composed of eight Roses Gules barbed and seeded proper set upon a Rim Or a Mount Vert thereon a Bull Argent supporting a Beacon Sable fired proper.
Motto: 'SPECTEMUR AGENDO' - Let us be judged by our deeds.

The arms were officially granted on April 28, 1952

The cornflowers are from the arms of the Chorley family, as in the arms of the Borough of Chorley. The black pale represents the A6 trunk road which runs through the District, and the emblems on it stand for the local families of Standish and Charnock.

The red roses are for Lancashire and the mount and beacon represent Rivington Pike. The beacon supported by a white bull is from the heraldry of the de Hoghtons, and also alludes to farming.