From Heraldry of the World
Your site history : Christopher Allan Altnau
Jump to navigation Jump to search

Country of origin : United States of America
Place of origin : Texas
Granted : No
Granted/officially recorded by : - 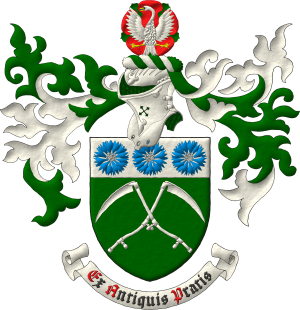 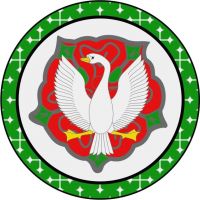 Crest: On a Helm with a Wreath Argent and Vert, a Swan displayed proper in front of a Rose Gules, barbed Vert, for mantling Vert doubled Argent, and for motto “Ex Antiquis Pratis.”

Badge: Argent, a Swan displayed proper in front of a Rose Gules, barbed Vert, within an Annulet Vert, a Semy of Crosses clechy.

SURNAME MEANING: In the heraldic tradition, many families take their surname from the name of the lands or the region in which their earliest known ancestors originated. In the German language, many place names end with the suffix of –au, which signifies a flat, low-lying area near a river, i.e., a meadow. The German word, “alten,” means ancient, thus, when this word and this ending are combined, the surname comes to mean “ancient meadow.” This meaning seems very fitting, given that much of the Altenau ancestral lineage is made up of farmers.


The Altenau family members for whom they have verified records lived in the Kingdom of Prussia, Province of Posen, Kreis (County) of Kolmar, Township of Brodden, verifiably as far back as 1861, but possibly as far back as the mid 1790’s (these relations cannot yet be proven, however.) Those old, Prussian records show the spelling of their family name as Altenau. It was only after the family’s immigration to the United States that the spelling changed to “Altnau.” The reason for this change in spelling is not certain, although it has been surmised that the error was perhaps due to a clerical oversight, committed by an employee at either the port of entry, or in the office of naturalization. In those days of hand-written records, such mistakes were quite common.


SYMBOLISM (COAT OF ARMS): For the coat of arms, the green field symbolizes the “ancient meadow,” referred to by the surname of Altenau, i.e., the Altenau family’s ancestral homelands. The two, silver, crossed scythes refer to a sense of reverence and respect for the agricultural and farming legacy of the Altenau family. The fact that the scythes are crossed (“in saltire”) also symbolizes the cross of Saint Andrew, a sign of strong, Christian faith. The three, blue cornflowers represent the Altenau family’s Prussian heritage; the cornflower was the national flower of the Kingdom of Prussia. The silver stripe at the top of the shield represents peace and sincerity, two core tenets which are intrinsic to the profession of farming. Traditionally, the color green is indicative of hope, joy, and a deep loyalty to one’s family; this color scheme was chosen because it embodies the ideals and principles upon which the Altenau family was founded. The coat of arms does not change through the act of being inherited. It remains constant.


MEANING OF MOTTO: The Latin motto, Ex Antiquis Pratis, means: “From the ancient meadows,” which is literally the meaning of the Altenau surname.


SYMBOLISM (CREST) FOR CHRISTOPHER ALTNAU: In the Germanic tradition, family coats of arms are differentiated among different branches of the family by means of altering the crest. The main arms of the shield remain unchanged, as mentioned above. This particular crest represents Christopher Allan Altnau, his wife, Magdalena, and all of their direct descendants. The rose is a symbol of American Patriotism; it is the national flower of the United States of America. Traditionally, the swan in heraldry has symbolized poetic harmony and learning, or a person who holds these sentiments dear; it is also associated with light, love, grace, sincerity, and the pursuit of perfection. The swan’s wings are displayed, which signifies dignity, self-confidence, and courage. The swan is therefore representative of their family’s love of learning and quest for knowledge, as well as the “learned professions” of many members of the modern-day Altnau family (librarian, teacher, photographer, writer, illustrator, etc.)


FURTHER, PERSONAL MEANINGS: All of the things mentioned above are traits that the armiger and his wife, Magdalena Altnau, has in abundance. She not only possesses these traits personally, but also actively strives to instill those things in their children. To the armiger, she is the swan, magnificent and proud, graceful and beautiful.