From Heraldry of the World
Your site history : Clitheroe RDC
Jump to navigation Jump to search 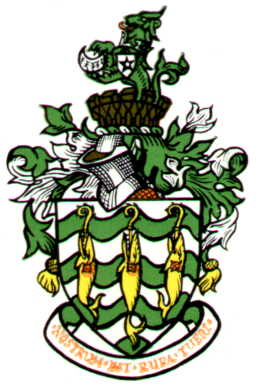 Arms : Barry wavy of eight Argent and Vert three Whales in fesse haurient in the mouth of each a Crozier Or and each charged with a Rose Gules barbed and seeded proper.
Crest : On a Wreath of the Colours issuant from the Battlements of a Tower Purpure a demi Lion Vert gorged with a Ducal Coronet Or pendant therefrom an Escutcheon Argent charged with a pierced Mullet Sable and holding between the claws a Crescent Ermine.
Motto: 'NOSTRUM EST RURA TUERI' - Our task is to look after the needs of the countryside

The arms were officially granted on April 9, 1954.

The white waves across the shield represent the four rivers of the Rural District - the Ribble, the Hodder, the Calder and the Loud. The green between these characterises the predominantly rural countryside as well as incorporating an apt reference to the late Mr. James Green, M.B.E., J.P., the donor and at that time Chairman of the Council. The three golden whales and croziers are from the arms of Whalley Abbey which exercised such a strong influence over the life and wellbeing of this area in medieval times and ecclesiastical jurisdiction over a vast parish which included the whole of the Rural District. The red roses are for Lancashire.

The battlements represent historic castle of Clitheroe, for Clitheroe Castle was originally a parish of this Rural District, its keep being depicted on the Council's original seal. The colouring of the tower is note-worthy, for no other civic authority has a purple tower on its arms.
This tincture derives from the purple lion of the de Lacy family who built the Norman castle at Clitheroe and enjoyed possession of the Honor of Clitheroe which included the manors of the present Rural District. The green lion derives from the heraldry of the Shireburnes of Stonyhurst and the ermine crescent is the emblem of the ancient Weld family. The golden coronet is from the arms of the illustrious Stanleys, Earls of Derby and the shield displays the arms of the Asshetons to mark their long association with this part of Lancashire. The late Sir Ralph C. Assheton, Bart. was the Council's first Chairman.

The motto defines the policy of this local authority administering a rural area which lies close to a number of the industrial centres of Lancashire.