From Heraldry of the World
Your site history : Colchester
Jump to navigation Jump to search 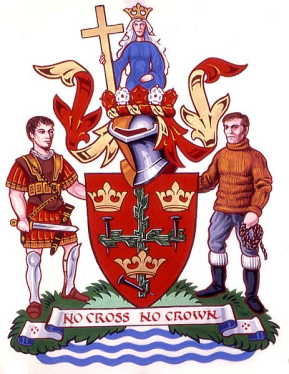 Arms : Gules four Pieces of Wood raguly conjoined in a cross proper each side arm transfixed with a Nail palewise Sable ensigned by an Ancient Crown Or and that in base enfiling a like Crown and transfixed by a like Nail in bend.
Crest : On a Wreath of the Colours issuant from a Chaplet of Roses alternately Gules and Argent a Female Figure habited Azure and Veiled Argent crowned Or holding a Passion Cross Or.
Supporters : To the dexter a Roman Centurion habited and holding in his dexter hand a Short Sword proper and to the sinister an Oyster Fisherman habited and holding in his sinister hand a Length of Rope proper each standing on a Compartment comprising a Grassy Mound proper and an Estuary barry wavy Argent and Azure.
Motto: 'No cross, no crown'

The arms were officially granted on 1976, augmenting the traditional arms (see below) with a crest, motto and supporters.

The crest depicts St. Helena and the supporters refer to the town's Roman connections and local industries. The style of the crowns on the shield was also changed from ducal to ancient crowns. The council, however , mainly still uses the old arms. 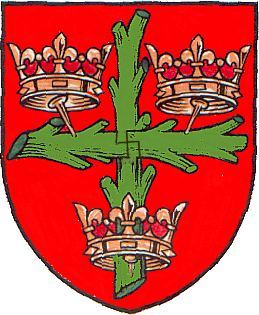 Gules a Cross raguly couped proper the arms joined in fylfot between two Ducal Coronets in chief Or the bottom part of the cross enfiled with a Ducal Coronet of the last beneath each coronet a Nail of the first each piercing the cross.

These are not registered with the College of arms but are obviously very ancient.

St. Helena was traditionally born in Colchester in the 3rd Century AD. In the early fourth century she made a pilgrimage to the Holy Land and discovered the true cross growing as a tree at Golgotha. Later she is said to have discovered relics of the Magi, now in Cologne (Köln) Cathedral. Three crowns also appear in the arms of Cologne.

The arms were altered at the time of reformation so as not to appear idolatrous. The living cross was changed to two white ragged staves and the nails were removed. These arms were confirmed in 1558 and recorded in use in 1634. The town council reverted to the original arms in 1915.