From Heraldry of the World
Your site history : Colwyn
Jump to navigation Jump to search 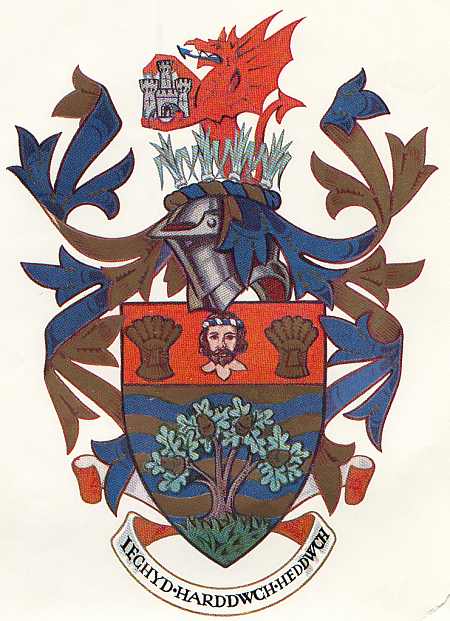 Arms: Barry wavy of eight Or and Azure on a Mount in base issuant an Oak Tree proper fructed Or on a Chief Gules between two Garbs Or a Saracen's Head afrontee erased proper wreathed about the temples Argent and Azure.
Crest: On a Wreath of the Colours in front of a demi Dragon Gules holding a Grey Stone Castle of three towers four Leeks erect proper.
Motto: 'IECHYD HARDDWCH HEDDWCH' - Health, beauty, tranquillity.

The shield has a background of gold and blue waves for the coastal areas. Overlying the waves is the oak tree with gold acorns from the arms and former seal of Colwyn Bay. On the chief is the Saracen's head of Marchudd ap Cynan, founder of the VIII Noble Tribe of North Wales and Lord of Abergele and Rhos. It was the device of Abergele and is flanked by two gold wheatsheaves for the rural districts of Aled and Hiraethog. The crest shows the Red Dragon from the Colwyn Bay and Clwyd County Council crests, holding a three-towered castle for the ancient castles and strongholds of the district. In front of the dragon stand four leeks, suggested by the seal of Hiraethog Rural District Council, to represent the four authorities united in Colwyn. The motto : IECHYD, HARDDWCH, HEDDWCH means Health, Beauty, Tranquillity.