From Heraldry of the World
Your site history : Connecticut
Jump to navigation Jump to search 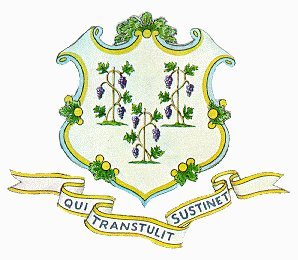 Origin/meaning :
The law establishing the coat of arms was officially adopted on March 24, 1931, refining a basic design (the grapevines and motto) first used in 1711. The official description called for "A shield of rococo design of white field, having in the center three grape vines, supported and bearing fruit. The vine located in the center of the shield and the vine located on the right side of the shield shall ascend in a counterclockwise manner. The vine located on the left side of the shield shall ascend in a clockwise manner. The bordure to the shield shall consist of two bands bordered by fine lines adorned with clusters of white oak leaves (Quercus alba) bearing acorns. Below the shield shall be a white streamer, cleft at each end, bordered with two fine lines, and upon the streamer shall be in block letters the motto 'QUI TRANSTULIT SUSTINET.'"
"Qui Transtulit Sustinet" is the state's motto. It was adopted in 1639 and translates as "He who transplanted us, sustains us."

The seal of the old Saybrook Colony in what is now Connecticut, introduced in 1639, depicted 15 grapevines, with a hand issuing from clouds in the upper left corner holding a scroll inscribed "Sustinet qui transtulit (He who transplanted sustains)." This seal was transferred to the Connecticut Colony when it purchased the land and fort of the Saybrook settlement in 1644 and used de facto by the colony's General Court (legislature). On October 9, 1662, coincident with the promulgation of Connecticut's royal charter, the seal was formally adopted by the general assembly as the seal of the colony. It was used until 1687, when James II's despotic royal governor Edmund Andros abolished self-government throughout New England; the original seal disappeared during this period.

The charter of Connecticut was restored in 1689. On October 25, 1711, the governor and council (upper house of the General Assembly) directed the purchase of a new seal, which was essentially that in use today. The grapevines were reduced to three--perhaps to represent the three original colonies of New Haven, Saybrook, and Connecticut (Hartford). The motto scroll was moved to the bottom of the oval seal and the words rearranged to read "Qui transtulit sustinet." The only change to the seal of Connecticut since then was made in May 1784, after independence, changing inscription on the rim from SIGILLUM COLONIAE CONNECTICUTENSIS to SIGILLUM REIPUBLICAE CONNECTICUTENSIS (Seal of the State of Connecticut).

The seal of Connecticut from 1711: 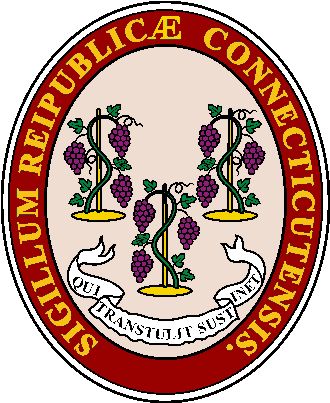