From Heraldry of the World
Your site history : Consett
Jump to navigation Jump to search 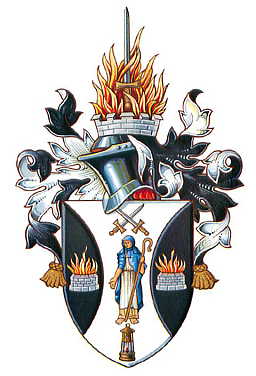 Arms : Argent a representation of St. Ebba proper supporting with the sinister hand a Pastoral Staff Or between in chief two Swords in saltire also proper hilts and pommels Gold and in base a Miner's Lamp likewise proper two Flaunches Sable each charged with a Furnace fired also proper.
Crest : Issuant from a Mural Crown flames enveloping a Sword proper hilt and pommel Or; Mantled Sable doubled Argent.

The arms were officially granted on September 17, 1955.

The central figure represents St. Ebba or Æbbe, the daughter of King Æthelfrith of Bernicia. She founded a monastery at Ebchester, on the site of a Roman camp known as Vindomora, where the old Roman road named Dere Street leaves the district to the north. The crossed swords allude to the settling a group of Lutheran swordmakers from Solingen in Germany at Shotley Bridge in 1691, and the making of what are still considered some of the best of their type - Shotley Swords. The lamp and black flaunches refer to mining.

The mural crown is an emblem of civic government and the flames and sword, together with the furnaces in the shield, refer to the Consett steel industry.