From Heraldry of the World
Your site history : Conwy
Jump to navigation Jump to search 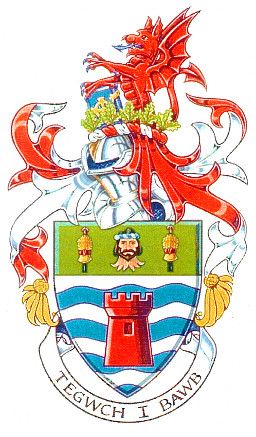 Arms : Barry wavy Argent and Azure a Tower Gules on a Chief Vert between two Spears palewise Sable embrued proper each transfixing a Garb Or tied Gules a Saracen's Head affronty erased proper wreathed about the templates Argent and Azure.
Crest : On a Wreath Argent and Gules within a Circle of Oak Sprigs Vert fructed Or five manifest a demi-Dragon Gules langued and armed Azure supporting with the dexter foot a Book Argent bound Azure clasped and charged on the front with a Celtic Cross Or.
Motto: Tegwch i bawb

The shield illustrates the topography and history of the region. The wavy white and blue field suggests the coastal position of the County Borough, and the embattled tower the castle of Conwy. The spearheads, garbs and saracen's head are taken from the arms of the former Boroughs of Aberconwy and Colwyn. The spearheads represent Nefydd Hardd (Nant Conwy), the wheatsheaves suggest the formal rural districts of Aled and Hiraethog, and the saracen's head comes from the arms of Marchudd ap Cynan, founder of the eighth Noble tribe of North Wales and Lord of Abergele and Rhos.