From Heraldry of the World
Your site history : Cotswold
Jump to navigation Jump to search 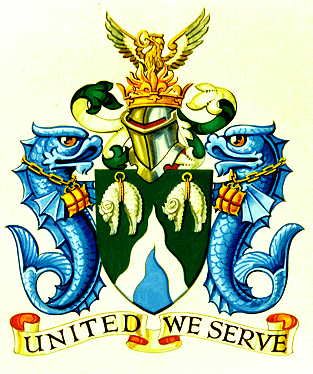 Arms : Vert in chief two Fleeces Argent each banded and ringed Or and in base on a Pile wavy reversed Argent a like Pile Azure.
Crest : A Phoenix issuant proper from a Coronet of Fleur-de-Lys and holding in the beak an Annulet Or; Mantled Vert doubled Argent.
Supporters : On either side a Dolphin Azure each gorged with a Chain and pendent therefrom a Woolpack Or corded Gules.
Motto: 'UNITED WE SERVE'

The shield design includes two fleeces in reference to the woollen industry, and a pile wavy reversed argent charged with a like pile azure for the source of the River Thames. Links with the past are contained in the coronet, golden woolpacks, dolphins and the phoenix, that form the crest and supporters.

The phoenix comes from the unofficial arms of Cirencester UDC. The coronet was found in North Cotswold RDC's crest. The woolpacks were in the arms of Northleach RDC.