From Heraldry of the World
Your site history : Cranleigh
Jump to navigation Jump to search 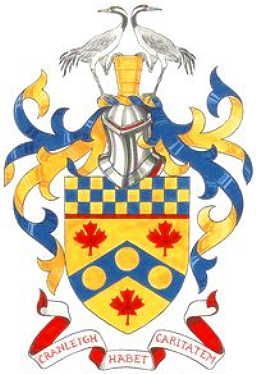 Arms : Or on the Chevron Azure between three Maple Leaves Gules three Bezant a Chief chequy of the first and second fimbriated Gules.
Crest : On a Wreath of the Colours two Cranes reguardant respectant each resting the interior leg on a Basket Or.
Motto: 'CRANLEIGH CARITATEM HABET ' means Cranleigh Cares.

The blue and gold chief is derived from the arms of the De Warrene family, Earls of Surrey and goes back to at least 1300. The three maple leaves represent the countryside, the Acer Rubrum growing in the High Street and the village's links with Canada. The three bezants, on the chevron, are symbols of St Nicolas, to whom the parish church is dedicated. He represents generosity, care and kindness.

The two cranes refer to the name of the village. They are shown looking backwards to the past as a reminder of where we have come from, and forward to the future but guarding the task at hand as they hold their foot on a basket.