From Heraldry of the World
Your site history : Crosby
Jump to navigation Jump to search 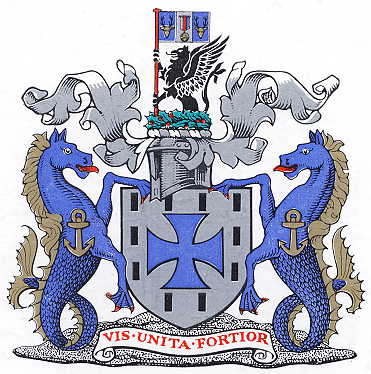 Arms : Argent a Cross patée Azure within an orle of ten Billets Satle.
Crest : On a Wreath of the Colours issuant from a Wreath of Holly fructed proper a demi Griffin holding in the claws a Staff erect proper flying therefrom to the sinister a Banner Azure on a Pale Argent between two Stags' Heads caboshed Or a representation of the Waterloo Medal and Riband proper.
Supporters : On either side a Sea Horse Azure maned finned and charged on the shoulder with an Anchor Or.
Motto: 'VIS UNITA FORTIOR' - United strength is stronger .

The arms were officially granted on August 7, 1937.

I have no information on the meaning of these arms.

Literature : Scott-Giles, 1953 and from "http://www.civicheraldry.co.uk