From Heraldry of the World
Your site history : Cruiser USS Mobile Bay
Jump to navigation Jump to search 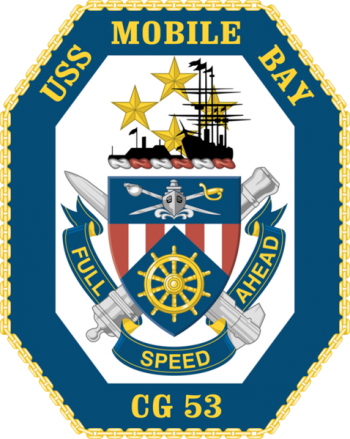 The wheel symbolises naval leadership on the oceans of the world. The emblem on the chief is the Badge of the Surface Warfare Forces. The Gun Barrel behind the Shield signify the main armament at the Battle of Mobile Battle. The Missile symbolise the armament of the Modern Cruiser. The Crest recalls the steam sloop USS Hartford and the ram CSS Tennessee of the Battle of Mobile Bay. The Hartford was the Flagship of Admiral David Farragut's Federal Fleet, the four Stars indicates that Farragut was commissioned as the Navy's first four-star Admiral.