From Heraldry of the World
Your site history : Cruiser USS Normandy
Jump to navigation Jump to search 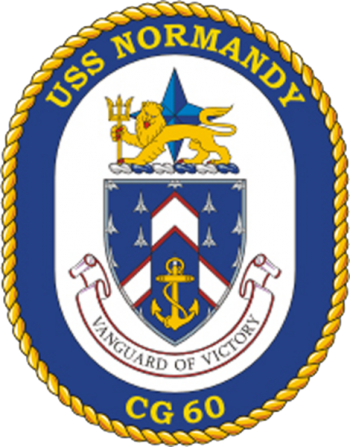 The Shield alludes to the Landing in Normandy in 1944, the Caltraps signifiy the German defences broken through by the allied Forces indicated by the Chevron. The Crest shows the Lion from the Arms of Normandy, it is grasping a trident signifiying Naval Fire support during the Landing. The Four-pointed Star symbolises the Allied Forces joined together for the Landing.