From Heraldry of the World
Your site history : Cults Academy
Jump to navigation Jump to search 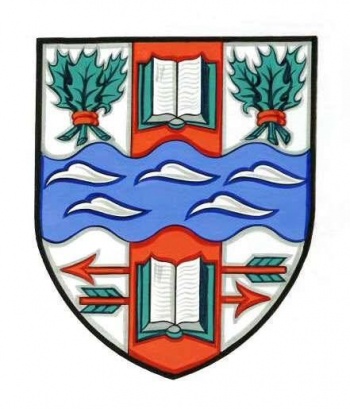 Argent, on a pale Gules two open books of the First, bindings and fore-edges Vert in chief and in base, accompanied by two sheaves each of three holly leaves of the Third, banded of the Second, in dexter and sinister chief, and surmounting in base two arrows fessways of the Second, feathered of the Third, the lower contournee, all surmounted of a fess wavy Azure, foam flecked of the First.

The principle feature of the arms is a representation of the River Dee running from east to west as it does through the city, passing the site of the school. Around this are arranged a variety of charges which include books to refer to education and holly leaves to represent the Irvines of Cults, a local landowning family in previous centuries.

Literature: Image taken from the Court of Lord Lyon Facebook