From Heraldry of the World
Your site history : Currie
Jump to navigation Jump to search 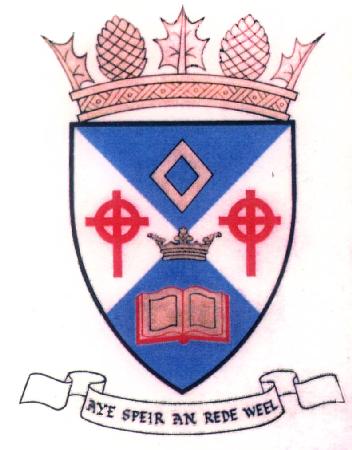 Per saltire Azure and Argent, in chief a mascle Or, and in base an open book Or, binding and fore-edges Gules, and in each flank a Celtic cross Gules, at the centre point a ducal coronet of the Third.

Above the Shield is placed a Coronet appropriate to a statutory Community Council, videlicet:- a circlet richly chased from which are issuant four thistle leaves (one and two halves visible) and four pine cones (two visible) Or, and in an Escrol below the same this Motto "Aye Speir an Rede Weel".

The shield has a diagonal quartering of azure blue and white, representing the colours of the Scottish flag, the St Andrew's Cross.

The upper quarter shows a Gold Mascule, part of the arms of the Wardlaw family, one time overlords of the area. It was one of this family, Bishop Wardlaw, who founded St Andrews University.

The Lower quartile shows an Open Book, with Gold Pages indicating a place of higher learning, Heriot-Watt University and, as the pages of a book are made from paper, this commemorates the former paper-making industry of the area.

The other two quarterings show a celtic cross. The first cross represents the existence of a Christian community for well over 1000 years: indeed back to the wanderings of St Kentigern in 570 AD. His pet name of St Mungo is recorded in the well at the side of the walkway along the river. The second cross represents the setting up of the Headquarters of the Archdeacons of Lothian in 1018 AD by King Malcolm Ceannmhor at the Lennox Tower, after the recapture of the old Principality of Lothian from the Angles. The present day Lennox Tower, with its Mary Queen of Scots connection, was rebuilt on top of the old fortification in the fifteenth century.

The two crosses together represent the two clerics of Currie who became Chancellors of Scotland (Prime Ministers), namely William de Boco and Sir Robert of Kildeleith who also raised the church in Dunfermline to the status of an Abbey in 1240 AD and later became its Abbot. Two other clerics Walter de Wardlaw and William Whitelaw became secretaries to the King of Scots.

The Gold Crown in the centre of the Shield signifies the area as being a former Royal Estate. When Marjorie, daughter of King Robert the Bruce, married in 1315 AD Walter, High Steward of Scotland, the lands of the Riccarton Estate, which now houses the Heriot-Watt University, were part of the marriage dowry. It was from this marriage that the Stewart dynasty started.

Literature : Information from the Currie council, 2001