From Heraldry of the World
Your site history : Cynon Valley
Jump to navigation Jump to search 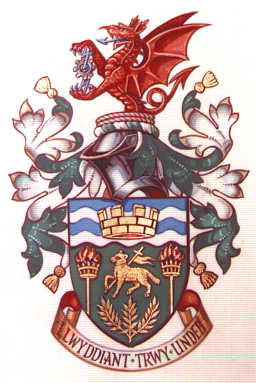 Arms: Vert between in base three Fronds of Mountain Ash conjoined and in the flanks two Cressets Or fired proper a Pascal Lamb also Or on a Chief wavy barry wavy of four Azure and Argent a Mural Crown Gold.
Crest: On a Wreath Argent and Vert out of two Coils of Cable proper a demi Dragon Gules holding between the fore-claws a Bolt of Lightning Azure enfiled by a Cogwheel proper
Motto: 'LLWYDDIANT TRWY UNDEB' - Success through union.

The green background represents the hills and valleys. The Pascal Lamb is an emblem of St. John the Baptist, to whom the ancient church at Aberdare is dedicated. Mountain Ash is denoted by three fronds of the tree of that name. The two 'cressets' or fire baskets filled with blazing coal, recall the former coal and iron industries of the valley in which the parishes of Rhigos and Penderyn were also involved. Such a cresset appeared in the former Vaynor and Penderyn RDC arms in reference to these industries and to the Brecon Beacons and is the emblem of the Brecon Beacons National Park, part of which is in the Borough area. All the emblems are in gold, denoting prosperity and mineral wealth, and are placed in topographical order.

The upper part of the shield symbolises the overall authority of Cynon Valley. The four blue and white waves for the four former areas and the four rivers - Cynon, Taff, Dâr and Hepste, overlaid by a gold mural crown, ancient emblem of local government, showing four battlements, again for the four former authorities.

The wreath in green and white shows the national colours, and this pastoral limestone area's natural colours. The Red Dragon, is shown as in the Mid Glamorgan County Council crest. It rises from a double coil of cable and holds a blue lightning flash struck through a cogwheel to suggest the area's newer industries - cable manufacture, electronics and engineering.