From Heraldry of the World
Your site history : Dalkeith
Jump to navigation Jump to search 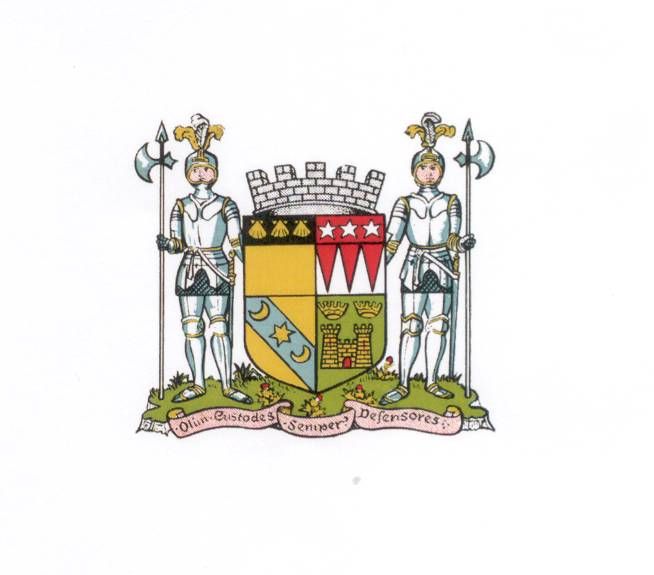 Quarterly: 1st, Or, on a chief Sable, three escallops of the field; 2nd, Argent, three piles Gules, on a chief of the Last, three mullets of the First; 3rd, Or, on a bend Azure, a mullet of six points between two crescents of the field; 4th, Vert, a castle of two towers Or, masoned Sable, port and windows Gules, in chief two open crowns Or.

Above the Shield is set a coronet suitable to a Burgh, and on a Com­partment below the Shield with this Motto "Olim Custodes Semper Defensores" are set for Supporters two men in complete armour each holding in his exterior hand a halbert Proper.

The arms are related to the device on the Burgh seal. The first three quarters recall the three famous families which have been so closely connected with Dalkeith, and show the arms of Graham, Douglas (represented by the arms of Douglas of Dalkeith and Lochleven as conjoined by the Earls of Morton, but with three stars in chief instead of two) and Scott; on the seal Douglas had been wrongly represented by the more familiar Douglas arms showing the crowned heart below a chief with three stars.
The 4th quarter is for the Burgh itself; it shows a castle to recall the old Castle of Dalkeith and the later Dalkeith Palace, built in the eighteenth century by Anne, Duchess of Buccleuch and Moo­mouth.

The two crowns above, the supporters and the motto are in reference to the occasion in 1637-38 when the Scottish Privy Council removed from Linlithgow to Dalkeith, taking the Scottish Regalia with them for safety.

The Latin motto means "Once the keepers, always the defenders" and comes from the old seal.