From Heraldry of the World
Your site history : Damaraland
Jump to navigation Jump to search 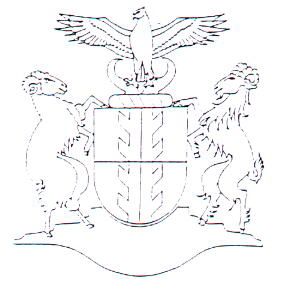 Arms: Quarterly, Argent and Brunatre, over all a pale reguly of eight counterchanged, the projections opposite each other.
Crest: A Hawk eagle with wings displayed, perched on two bovine horns, proper.
Wreath: A head-ring Argent and Brunatre.
Supporters: Dexter a karakul and sinister a goat, both proper.

The arms were proposed but never officially adopted.

The homelands, and thus the arms, were abolished in 1990 at the independence of Namibia.