From Heraldry of the World
Your site history : Dartmouth
Jump to navigation Jump to search 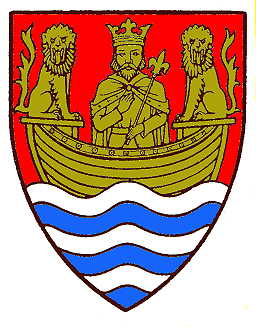 Gules on Water barry wavy in base proper an Ancient Ship issuant from the centre thereof the Figure of a King robed crowned and holding in his sinister hand a Sceptre on the bow and on the stern of the ship a Lion sejant guardant that to the dexter contourné all Or.

The arms were historically recorded as a seal device (untinctured) at the Visitation of 1620; confirmed by Kings' of Arms Certificate 31st January 1951.

The arms are based on an ancient seal of the former Corporation. The figure is believed to be Edward III, who granted the town a charter.The arms bear a general resemblance to his gold noble, in which he is represented as 'Lord of the Sea'; and the are a reminder that Darmouth provided ships for his French wars. On the seal and in some representations of the arms, a crescent and star are placed either side of the king's head. These were originally crusading emblems, and are thought to refer to the fact that Richard I's host sailed from Dartmouth for the Holy Land.