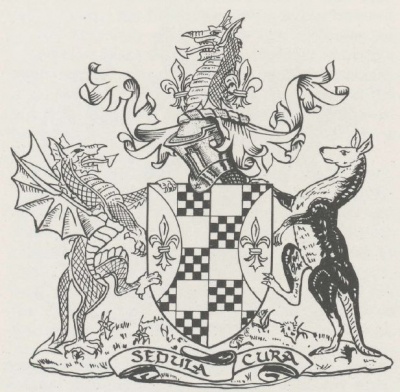 Arms : Cheeky alternately Or and cheeky Argent and Sable, two Flaunches Azure on each a Fleur-de-lys Or.
Crest : On a Wreath Or and Gules, a Dragon's Head erased Sable between two Fleurs-de-lys Or.
Supporters : On the dexter side a Dragon Gules winged Argent, and on the sinister side a Kangaroo proper.
Motto: 'Sedula Cura'.

The arms were officially granted on January 1, 1968.

In the shield the subdivisions represent the many departments of a department store, while the cheeky portions stand for accounting (cf. the word 'exchequer'). The staunches and fleurs-de-lys are taken from the Arms of the Jones family less the anchors, since a differentiation is necessary.

The supporters are a dragon for Wales, with white wings to differentiate it from the Royal Dragon, and a kangaroo for New South Wales.