From Heraldry of the World
Your site history : Dawley
Jump to navigation Jump to search 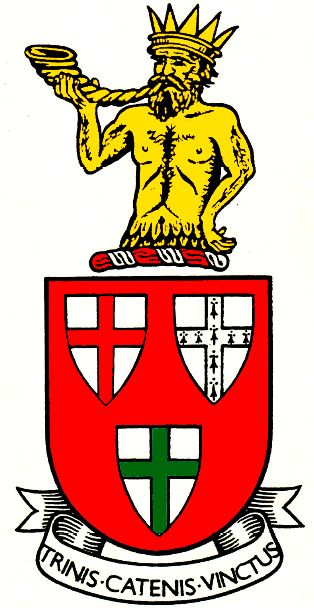 Arms : Gules, three escutcheons argent, the first charged with a cross of the field, the second with a cross erminois, and the third with a cross vert.
Crest: On a wreath of the colours, A demi triton winding a conch horn and crowned with an antique crown all Or.
Motto: Trinis catenis vinctus.

The shield's three escutcheons and the motto Trinis catenis vinctus alluded to the parishes of St. Luke, St. Leonard, and the Holy Trinity, and the crest to Capt. Webb. Captain Matthew Webb (19 January 1848 - 24 July 1883) was the first recorded person to swim the English Channel without the use of artificial aids for sport purpose. On 25 August 1875, Webb swam from Dover to Calais in fewer than 22 hours.