From Heraldry of the World
Your site history : Deal
Jump to navigation Jump to search 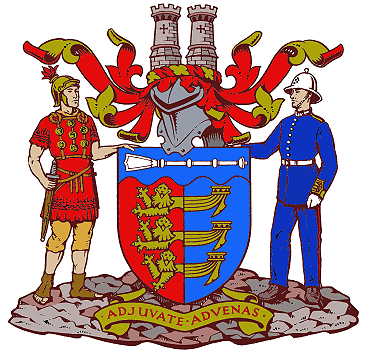 Arms : Per pale gules and azure, three demi lions passant guardant in pale dimidiated with three demi hulks of ships Or; on a chief azure a representation of the Silver Oar of the Cinque Ports.
Crest : On a wreath of the colours, Two towers proper.
Supporters : On the dexter side a Roman centurion and on the sinister side a Royal Marine in full dress uniform, the whole upon a rocky mount, all proper.
Motto: Adjuvate advenas

The arms were officially granted on March 4, 1968.

The two towers were previously used, placed above the arms of Sandwich, the town's Head Port. The towers almost certainly derive from those upon the mayoral seal, which also dates from 1699. They were said to represent Sandown and Deal castles on the northern and southern edges of the town, although neither was in the original Borough of Deal.

The centurion alludes to Deal being the approximate site of the Roman invasion of 55BC and the Royal Marine, is a reminder of the service's centuary of association with the town.

The motto is a reference to Deal's lifeboatmen and fishermen who, over the centuries, have saved many lives at sea.

Currently the Deal town council doe no longer use these arms, but uses the arms of the Cinque Ports instead. This is due to the fact that the College of Arms did not accept the transfer from the Borough arms to the Town Council, as these were not identical geographically. The town had used the old arms for more as 30 years before the College of Arms stepped in. Instead of applying for new arms (or a legal transfer), the town council adopted the historical Cinque Ports arms instead.

Literature : Image send to me by mail; https://www.bbc.com/news/uk-england-kent-21475707 and town council minutes provided by Derek Howard