From Heraldry of the World
Your site history : Deddington
Jump to navigation Jump to search 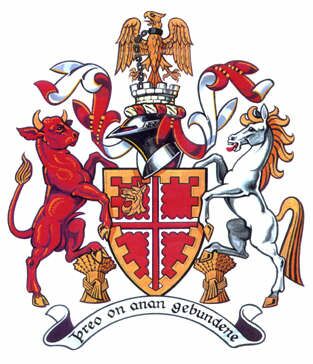 Arms : Gules upon a Cross engrailed Argent a Cross of the first in the first quarter a Wolf's Head erased all within a Bordure embattled Or.
Crest : Upon a Wreath of the Colours the Battlements of a Tower Argent thereupon an Eagle wings displayed Or gorged with a Collar pendent therefrom a Chain Sable.
Supporters : On the dexter side a Bull Gules and on the sinister side a Horse Argent both armed and unguled Or and each resting the interior hoof upon a Garb Gold.
Motto: 'ÞREO ON ANAN GEBUNDENE' - Three joined together in one

The arms represent the three manors of the Parish - Castle of Windsor, Duchy and Christ Church - and these are symbolised on the shield by a red cross, a wolf's head and an engrailed cross, all enclosed within an embattled border, signifying a town, enclosed and protected.

The crest represents Deddington Castle and a chained eagle symbolises Piers Gaveston who was imprisoned there (or in Castle House) in 1312.

The supporters - an ox on one side of the arms and a horse on the other - represent the market (and also Oxfordshire) and the horsefair respectively. Sheaves of wheat represent local farming.

The motto - Þreo on anan gebundene - is in Early English, not Latin; Deddington was a settlement before the Norman Conquest. It means three joined together in one, which refers to the three manors and also, no doubt, to the three villages of the Parish - Deddington, Clifton and Hempton.