From Heraldry of the World
Your site history : Delyn
Jump to navigation Jump to search 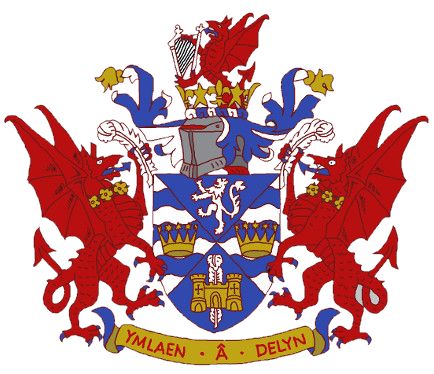 Arms: Per saltire Azure and Argent in chief a Lion rampant Argent in each flank three Bars wavy Azure surmounted by a Celestial Crown Or and in base in front of an Ostrich Feather erect Argent a Castle of two Towers Or.
Crest: On a Wreath of the Colours within a Circlet of four Fleurs-de-Lys and as many Mullets alternately Or a demi Dragon Gules supporting a representation of the Caerwys Eisteddfod Harp Argent.
Supporters: On either side a Dragon Gules gorged with a Garland of Roses Or barbed and seeded proper and holding aloft with the interior forefoot an Ostrich Feather that on the dexter in bend that on the sinister in bend sinister Argent.
Motto: 'YMLAEN Â DELYN' - Forward with Delyn.

The arms were granted on ?.

The white and blue waves, like those the arms of the Flint County Council, represent the rivers Dee and Alyn from which the Borough is named. The waves, with the golden celestial or saintly crowns, also refer to the Holy Well of St. Winefride and thus to the two Holywell Councils. The golden castle and white ostrich feather are taken from the civic badge of the Borough of Flint. The castle is derived from the old Borough Seal and the feather is that of Edward the Black Prince, who held Flint Castle and granted the town one of its Charters. It is shown on a blue background as in the Flint shield. The white lion on blue is that of the de Montalt family, long used with the ostrich feathers in the device of Mold UDC. Roger de Montalt was Seneschal to the Earls of Chester in the late 13th century and took his name from the 'high hill' or 'Mont hault' on which stood his castle, a name which became 'Mold'.

The circlet of fleurs-de-lys and five pointed stars, is similar to those on the crown in the crest of Flint. They are in gold and are related to those in the arms of the Courtauld family, while the stars also occur in the arms of Basingwerk Abbey. The Red Dragon is that of Wales, as in the arms of the Clwyd County Council, holding the ancient Eisteddfod harp from the arms of Caerwys. In addition to signifying the ancient associations of the area, the harp or 'Y Delyn' is a felicitous reference to the Borough's name.

The supporters are a variation of those of the Borough of Flint, which combine the Red Dragon of Wales, the golden rose badge of Edward I, who built Flint Castle and whose Charter of 1277 made Flint the oldest municipality in Wales, and the ostrich feather of Edward III and the Black Prince. The feathers also appear in the Mold device and that of Holywell.