From Heraldry of the World
Your site history : Derwentside
Jump to navigation Jump to search 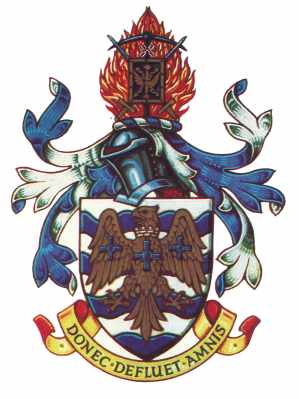 Arms : Barry wavy of eight Argent and Azure an Eagle displayed wings inverted Or gorged with a Mural Crown proper pendent therefrom by a Ring a Cross of St. Cuthbert and charged on each wing with a like Cross.
Crest : On a wreath of the Colours in front of Flames a Miner's Pick head upwards in pale and two Swords points upwards in saltire proper hilts and pomels Or pendent from the Pick by a Chain Argent a Roman Shield Sable charged with a Thunderbolt and on a Bordure Or ten Pellets.
Motto: 'DONEC DEFLUENT AMNIS' - Until the river ceases to flow

The waves represent the Rivers Derwent, Deerness and Browney and the Lanchester Eagle refers to the historic Roman associations of Dare Street, Longoviciurn (Lanchester), Vindomora (Ebehester) and Stanley. The three crosses of St. Cuthbert allude to the associations of the three constituent districts with Durham's patron saint.

The crest with Lanchester's pick and Consett's flames and swords symbolise the steel industry, while Stanley's Roman shield with black field and roundels and gold thunderbolt stands for coalmining and the broadcasting station at Pontop Pike.

Adapted from Horace, the motto means 'Until the river ceases to flow' and refers to the Derwent's importance to Derwentside District, indicated by the two D's.