From Heraldry of the World
Your site history : Despatch
Jump to navigation Jump to search 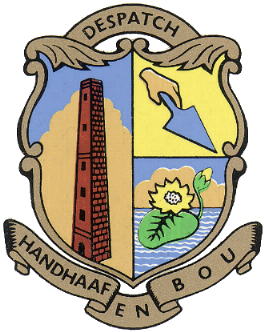 Arms: Per pale, the sinister half per fess: I: A brick-built brick kiln chimney proper; II: a: or, a hand holding a bricklayer's trowel in bend proper; b: a water lily on water proper.
Motto: Handhaaf en bou (Uphold and build).

In the first field the background is blue sky at the top, but for the rest obscured by cloud. The chimney, which is square in plan and tapers towards the top, has six marks on the dexter face which resemble windows, but the illustration is insufficiently clear to confirm this. The third field is divided per fess, the upper half similarly being a blue sky with cloud, the lower half being water represented by roughly drawn wavy white barrulets on blue, but not in any clear heraldic form. The water lily comprises a pad floating on the water with one open bloom and one flower bud, the two flowers both being above the line of division.

The community had a village management board from 1942 and became a municipality in 1945. The arms were adopted in 1957. It is not stated whether the arms were registered, but in the light of the unheraldic appearance they clearly have not been registered with the State Herald.

An information sheet provided by the municipality states that the chimney represents the brickfields that existed in the area in former years and which gave the town its name (the name arose, reportedly, because the bricks were dispatched to other destinations); the water lily represents the Swartkops River flowing through the town, and the hand with trowel represents the huge strides Despatch has made.