From Heraldry of the World
Your site history : Destroyer USS Chafee (DDG-90)
Jump to navigation Jump to search 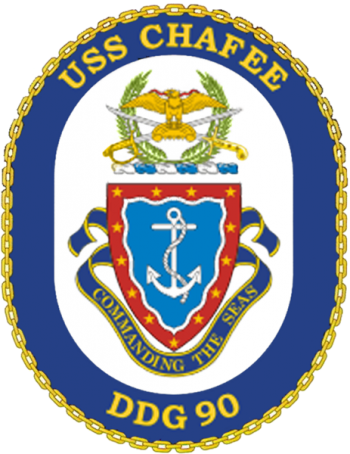 Shield: Azure (Blue), an anchor Argent (White); on a bordure wavy Gules (Scarlet) fimbriated of the second thirteen mullets Or (Gold).
Crest: On a wreath Argent and Azure, in front of a laurel wreath, a Naval officer’s sword and a Marine Corps Mameluke hilts to base saltirewise Proper; overall a representation of a gold eagle, arrows and base Or displayed in the U.S. Senate Chamber of the Capitol Building, holding in its beak a serpent Gules.
Motto: A scroll Azure fimbriated and inscribed “COMMANDING THE SEAS” Or.
Seal: The coat of arms as blazoned in full color upon a white oval enclosed by a dark blue collar edged on the outside with a gold rope and bearing the inscription “USS CHAFEE” at top and “DDG 90” in base all in gold.

SHIELD: Dark blue and gold represent the U.S. Navy. The thirteen gold stars symbolize the thirteenth state, Rhode Island. The anchor is derived from the Secretary of the Navy’s flag, a reference to John H. Chafee’s distinguished service (1969-1972). The scarlet border denotes sacrifice with honor, courage and commitment, personal attributes serving as a Marine rifleman and officer at Guadalcanal, Okinawa, North China and Korea. The bordure is wavy, referring to DDG 90’s multi-mission capabilities to protect the maritime interests of the United States and allies. White denotes integrity and gold signifies excellence CREST: The swords symbolize Senator Chafee’s distinguished service in World War II and Korean War, the many decorations he was awarded to his Marine company’s heroic combat achievements, and the readiness of DDG 90 to engage in combat. The laurel wreath, symbol of leadership and vigor, recalls the Senator’s service to his country as a Marine, statesman, three time Governor of Rhode Island (1962-1968), and as a conservationist to preserve the environment. The eagle refers to his role as United States Senator (1976-1999). Scarlet and gold signify respectively courage and merit.