From Heraldry of the World
Your site history : Destroyer USS Donald Cook
Jump to navigation Jump to search 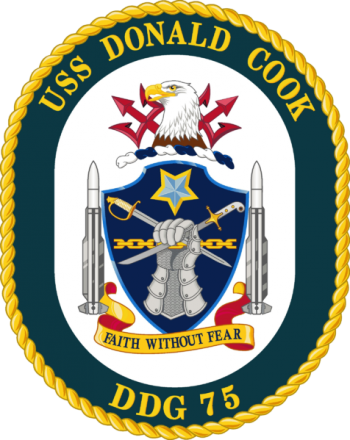 Shield: Azure, a gauntlet appaume Argent grasping a broken chain fesswise Or and a Naval sword and marine mameluke points down saltirewise Proper, in chief a mullet one point down Celeste fimbriated of the third.
Crest: Issuing from wreath Argent and Azure two tridents heads pilewise Gules, overall a bald eagle’s head Proper.
Motto: A scroll Or doubled Gules inscribed “FAITH WITHOUT FEAR” Azure.
Supporters: On either side of the shield a missile Argent.
Seal: The coat of arms in full color as in the blazon, upon a white oval enclosed within a dark blue border edged on the outside with gold rope and bearing the inscription “USS DONALD COOK” above and “DDG 75” in base all gold.

Dark blue and gold are the colors traditionally used by the US Navy. Red is emblematic of valor and sacrifice. The revised star denotes the Medal of Honor, our country’s highest honor, posthumously awarded to Colonel Donald G. Cook for his spirit of sacrifice and extraordinary heroism. The gauntlet grasps a broken chain underscoring Colonel Cook’s internment as a prisoner of war by the Viet Cong during which he unselfishly put the interests of his comrades before that of his own well-being, and eventually, his life. The swords are crossed to signify the spirit of teamwork, while symbolizing the heritage of the US Navy and Marine Corps. The mameluke represents Colonel Cook’s service as a Marine. The eagle symbolizes the principles of freedom upon which our country was founded and highlights military vigilance and national defense. The tridents represent sea power and underscore USS Donald Cook’s Aegis firepower and the capability to conduct operations in multi-threat environments. The missiles symbolize vigilance, resolve and battle preparedness, while suggesting the USS Donald Cook’s vertical launch capabilities.