From Heraldry of the World
Your site history : Destroyer USS Howard
Jump to navigation Jump to search 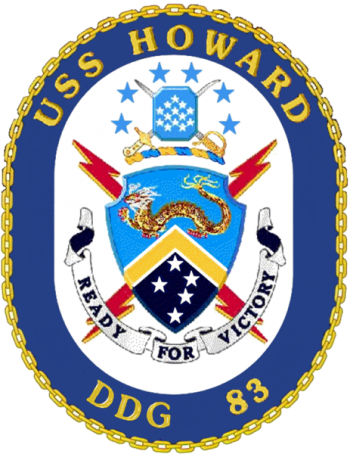 Shield: Per chevron Celeste and Azure, a chevron Or fimbriated Argent between in chief an oriental dragon Proper and in base five mullets of the fourth in the configuration of the Southern Cross. Crest: From a wreath Or and Celeste, a Marine mameluke and Naval sword saltirewise points up superimposed by a Medal of Honor neckpad Proper, all within an arc of six mullets Azure. Supporters: Two lightning flashes saltirewise Gules edged Or. Motto: A scroll Argent doubled and inscribed “READY FOR VICTORY” Azure. Seal: The coat of arms as blazoned in full color upon a white oval enclosed by a dark blue collar edged on the outside with a gold chain and bearing the inscription “USS HOWARD” at top and “DDG 83” in base all in gold.

Dark blue and gold are the colors traditionally associated with the Navy and represent the sea and excellence. The oriental dragon denotes service in the Pacific and the fighting spirit demonstrated by the platoon under the leadership of Gunnery Sergeant Howard. The chevron symbolizes naval support and strength. The stars, in the configuration of the Southern Cross represent the First Marine Division patch, which Gunnery Sergeant Howard wore and to the location of the North Vietnamese attack on Gunnery Sergeant Howard’s platoon. The six stars allude to the previous USS Howard’s World War II battles. The neckpad, suggesting an AEGIS array, highlights the modern warfare capabilities of the combat weapons system and represents the Medal of Honor, our country’s highest honor, awarded to Gunnery Sergeant Howard for leadership and bravery under fire. The crossed Naval sword and Marine mameluke denote cooperation and teamwork, as well as support to Marines ashore with advanced gunnery systems. The lightning flashes in the Marine Corps colors red and gold represent speedy action and modern technology.