From Heraldry of the World
Your site history : Devizes
Jump to navigation Jump to search 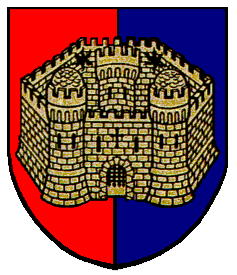 Per pale Gules and Azure a Castle in perspective the whole forming a hexagon the front triple-towered the two outer towers domed all Or each dome ensigned by an Estoile Sable.

The arms were not officially granted, but registered during the visitation of 1565.

The arms show the local castle, which was founded by Roger, Bishop of Salilsbury during the reign of King Henry I.