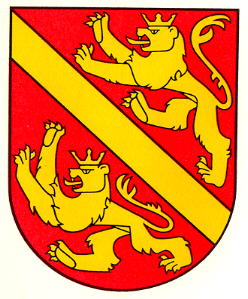 The arms are based on the arms of the medieval Counts of Kyburg in different colours (compare also Thurgau canton, Kyburg and the Principality of Kyburg). The town became a possession of the Counts of Kyburg in the 12th century. In 1178 Count Hartmann III of Kyburg built fortifications around the town and granted city and market rights to Diessenhofen.

In 1264 the city (and the County of Kyburg) became a possession of the Counts of Habsburg. This may have resulted in a change of colours, red and gold being the colours of Habsburg. It became part of Switzerland in 1460.

The current arms (dating from the middle of the 20th century) show the lions crowned. The crowned lions first appeared on a banner of the city from 1512, the origin of the crowns is not clear, according to legend they were granted by Pope Julius II when he granted the banner to the city. There is no evidence, however, that the pope granted the banner. The reason for the crowns thus remains unclear; the city was part of the Swiss Republic and addition of (royal) crowns did not fit in the political situation of the time.

On the official city windows (Standesscheiben) from 1531 the arms appeared without crowns:

During the 16th and 17th century images of the arms with and without crowns appear.

The city seals for a long time did not show the lions at all. The first seal showing the lions is known from 1641. In the late 18th century all heraldic images disappear from Swiss seals, and only in the 1820s the city starts to use the arms again on its seal.